This is part of a series of posts in conjunction with GAME 550: Incubation Studio, a graduate level course within DePaul University’s MFA Game Design program. These posts will follow my process in incubating a design concept to bolster engagement with performance arts, with a particular focus on how to integrate theatrical practices within digital game spaces.

Once I created personas for potential users/players, I worked on story boarding a scenario for my proposed design concept. I considered a few different approaches for what scenario to map out. Since my design concept is for a live video game that incorporates performance elements from actors who play the roles of NPCs, I thought about making a scenario of a specific in-game/in-performance moment. However, I ultimately chose to story board a more zoomed out and generalized experience of how a player would access the game and what types of things they could do during their time there.

Below is one of my early versions of the storyboard. Initially, I only had eight panels. I added the fourth and seventh panels of the shown 10-panel version after receiving feedback on my initial rough draft. The third panel in particular, which depicts a lobby screen, was an important addition. Prior to receiving feedback, I had not considered the relevance of a waiting space for creating a similar experience as one might have in a lobby before going to see a play in person. 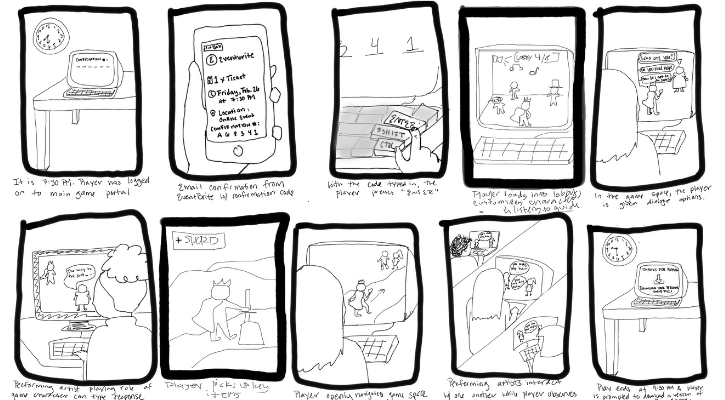 I cleaned up each panel for the final version of my storyboard and made final updates to the text descriptions below each panel. The storyboard is pictured below and includes the following panel descriptions in order: 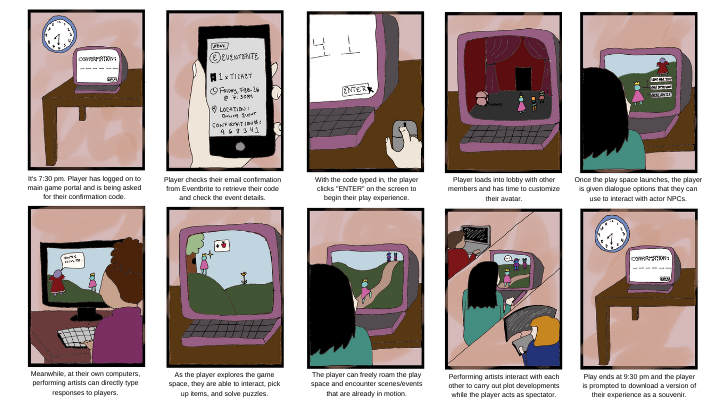 Games & Gaming
This site is part of the HASTAC network on Humanities Commons. Explore other sites on this network or register to build your own.
Terms of ServicePrivacy PolicyGuidelines for Participation